Once upon a time I flew over North-Eastern Canada, on my way to Houston, the weather was clear and I noticed the huge cuts of polar forest, clearly visible from the plane. Enormous extents of woods have been cleared in the North, around the Manicouagan Reservoir. I remembered this experience when consulting this striking collection of satellite photography (before and after) from NASA's State of Flux Gallery: 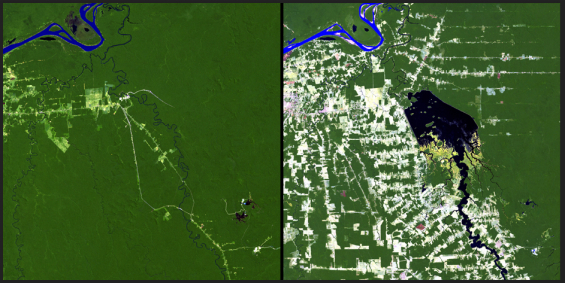 Left: June 24, 1984. Right: August 6, 2011. The Samuel Dam is located along the Jamari River in Rondonia, Brazil. These images show the area in 1984, shortly after construction of the hydroelectric dam began, and in 2011. The reservoir created by the dam flooded the upstream forest and displaced many people. Also evident in the images is the deforestation that has affected much of the region.

The State of Flux gallery features images of different locations on planet Earth, showing change over time periods ranging from centuries to days. Some of these effects are related to climate change, some are not. Some document the effects of urbanization, or the ravage of natural hazards such as fires and floods. All show our planet in a state of flux.