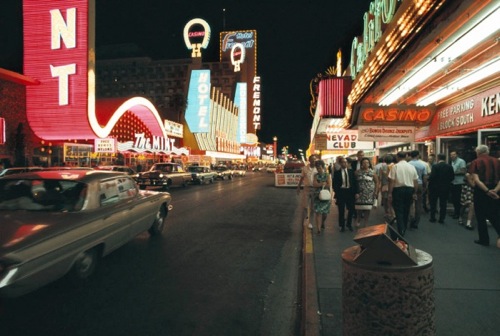 In 1968, American architects Robert Venturi, Denise Scott Brown, and Steven Izenour, with students from Yale University, embarked on a groundbreaking investigation of the Las Vegas Strip. Their fresh way of looking at the city: the influence of popular culture, advertising, film and the experience of the built environment from a moving automobile extended the categories of the ordinary, the ugly, and the social into architecture. Their use of photography and film as a research methodology became as revolutionary as their findings, which were published in the legendary 1972 book, Learning from Las Vegas.

The surprising amount of humor in “Las Vegas Studio” is one of its strengths. The students’ detailed taxonomy of casinos, which analyzes the buildings’ signage, interiors, parking and other features, identifies the Tropicana’s style as “Bauhaus Hawaiian.” Photos capture tourists posing with the gladiator statues outside Caesar’s Palace as well as Tail Pup, a Los Angeles hot-dog stand shaped like…a hot dog. An “Edward Ruscha” elevation of the Strip (1968) comes off as a tongue-in-cheek reference to artist Ruscha’s famous 1966 photo documentation Every Building on the Sunset Strip.

»» Flâneurs in Automobiles | Venturi and Scott Brown on the Road {en}

For Venturi, Scott Brown and Izenour photography and film were both the means of argumentation and representation of their research. Their approach was to use photographic methods borrowed from the disciplines of anthropology, sociology, and art. As a research methodology, it became as revolutionary as their findings, which were published in the book, Learning from Las Vegas.