¶ In the Wall Street Journal a terrible story about a new emerging business which seems very profitable : Assembling the Global Baby (WSJ)

Conversations between Mr. Rupak and his customers can be an odd mix of frank talk about sperm counts and menstrual cycles and good old-fashioned salesmanship. During one client meeting over tea in Chicago, Mr. Rupak first answers a question about the possibility of breast-feeding if you're not the birth mother. Then, as the conversation wraps up, he says: "I have some good news for you. We'll be offering you and your husband complimentary teeth-cleaning while you're in Hyderabad." His client, Caroline Lu, smiles. "That's great," she says. Ms. Lu later says she and her husband passed on the teeth-cleaning. 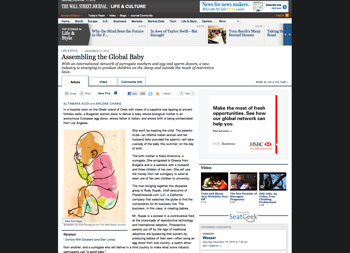 ¶ Scott Adams is a very funny guy (everybody knows that), read his take on the Assange's case in the Scott Adams Blog

Assange had a lot of help making Sweden look like the last place on Earth that you would want to take your penis. The aforementioned megahit movie, The Girl with the Dragon Tattoo, makes the place look like a snow-filled ass cave that Jeffrey Dahmer lived in before he got a raise. (It's a good movie otherwise.) If you haven't read any background about the so-called rape charges against Assange, you really should. Apparently Swedish laws are unique. If you have a penis, you're half a rapist before you even get through customs. And if your condom breaks, that's jail time. What I'm saying is that the Club Med in Sweden is a nervous place. 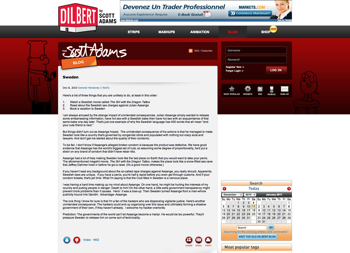 ¶ I always loved the Jaguar cars and the Type E above all : Automotive innovation: The Difference Engine: Birth of an icon (The Economist)

The most extraordinary thing about the E-Type was not just that its wind-cheating aerodynamic shape—at least in fixed-head coupé form—endowed it with one of the lowest drag coefficients for a mass-produced car ever. Nor was it simply the fact that the novel independent suspension at the rear, as well as at the front, allowed it to skate round corners like nothing before, while disc-brakes on all four wheels could bring it so abruptly to a stop. Nor even was it the powerful twin-cam engine, with its racing heritage, that could propel the car to 150 miles per hour in an age when the fastest most cars could manage was little more than half as much. All those features, and more, would have been enough to make the E-Type a classic. But what turned it into an icon that has endured for 50 years was the simple, yet remarkable, fact that it cost only half as much as anything comparable. In short, it put extraordinary motoring within the grasp of ordinary people.

¶ I'm worried that he's right, for the future at least : Invaders from Mars - Charlie's Diary

We are now living in a global state that has been structured for the benefit of non-human entities with non-human goals. They have enormous media reach, which they use to distract attention from threats to their own survival. They also have an enormous ability to support litigation against public participation, except in the very limited circumstances where such action is forbidden. Individual atomized humans are thus either co-opted by these entities (you can live very nicely as a CEO or a politician, as long as you don't bite the feeding hand) or steamrollered if they try to resist. In short, we are living in the aftermath of an alien invasion. 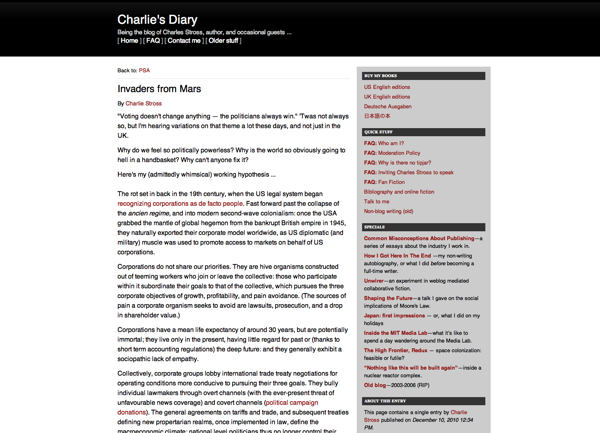