BBC News - Rove 'proud' of US waterboarding terror suspects: Karl Rove, nicknamed Boy Genius or Bush's brain, is the same asshole after all these years. In this BBC interview he said that he "was proud we used techniques that broke the will of these terrorists" (torture) and that waterboarding which simulate drowning shouldn't be considered torture. You read well: he's proud.

Why Academic Tony Judt’s Dazzling, Cantankerous Brain Is One of This City’s Great Treasures (New York Magazine): Tony Judt is an historian and a great mind — actually he's only a mind because his body is completely paralyzed by Lou Gherig's disease. But this mind is still greatly functioning. Profile of Tony Judt in The New York Magazine.
(via)

Questions Answered: Invented Languages - (NYTimes): Paul Frommer (the developer of Avatar’s novel tongue, Na’vi) and Arika Okrent (author of “In the Land of Invented Languages”) answer to questions about invented languages and linguistics, it makes a long but extremely interesting Q&A.

The View from Above: twitter visualization (makes lovely abstract pictures). 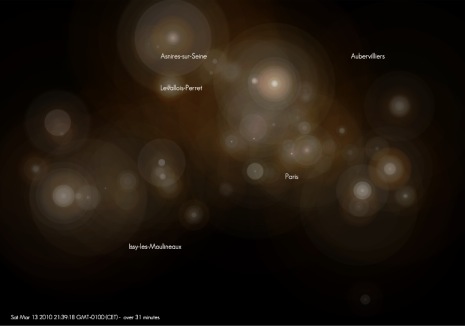